What are Lightweight Minibuses?

Lightweight minibuses are minibuses that have been converted from panel or window vans to keep the weight under 3500kg. Van converters do this to offer schools a way to avoid putting their staff through the D1 licence, as less-and-less teachers have an inherited D1 entitlement (on licences issued before 1 Jan 1997).

Under a Section 19 Permit drivers with a standard car licence (no D1 entitlement) can only drive 9-16 passenger vehicles that have a GVW of 3500kg or under. No manufacturer currently makes a factory-built 14 -17 seat minibus under 3500kg.

8 passenger seat vehicles (9 seats with driver) such as the 9-Seater Toyota Proace, Ford Tourneo or Citroën Space Tourer are officially classed as cars; you can drive these vehicles on a standard car licence. Therefore, in this context 9-seater vehicles are not considered lightweight minibuses.

Castle Minibus is often asked about non-D1 17 seat minibus options. If you’re looking for a 17- seat minibus you will have to buy a converted panel van. However, we don’t believe there are any on the market that don’t require D1 entitlement. Both the Citroen and Peugeot L4 H2 17 seat minibus are marketed as lightweight minibuses that can be driven without a D1. Both vehicles have a GVW of 4005kg, 505kg over the 3500kg limit.

If you are concerned that you have purchased or are driving these vehicles on a standard car licence, please contact the DVSA who can also advise on 0300 123 9000 or email technicalofficers@dvsa.gov.uk

The largest vehicle under 3500kg that Castle Minibus offer is the 15 seat Citroen Relay – which can be driven on a car licence. Castle Minibus recommend that all drivers of minibuses take the full D1 licence so that schools can be reassured the drivers pass a medical and site test and have been professionally trained to drive pupils in these larger vehicles. 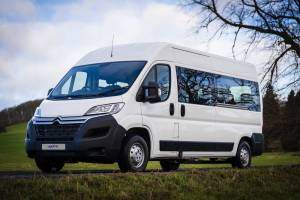